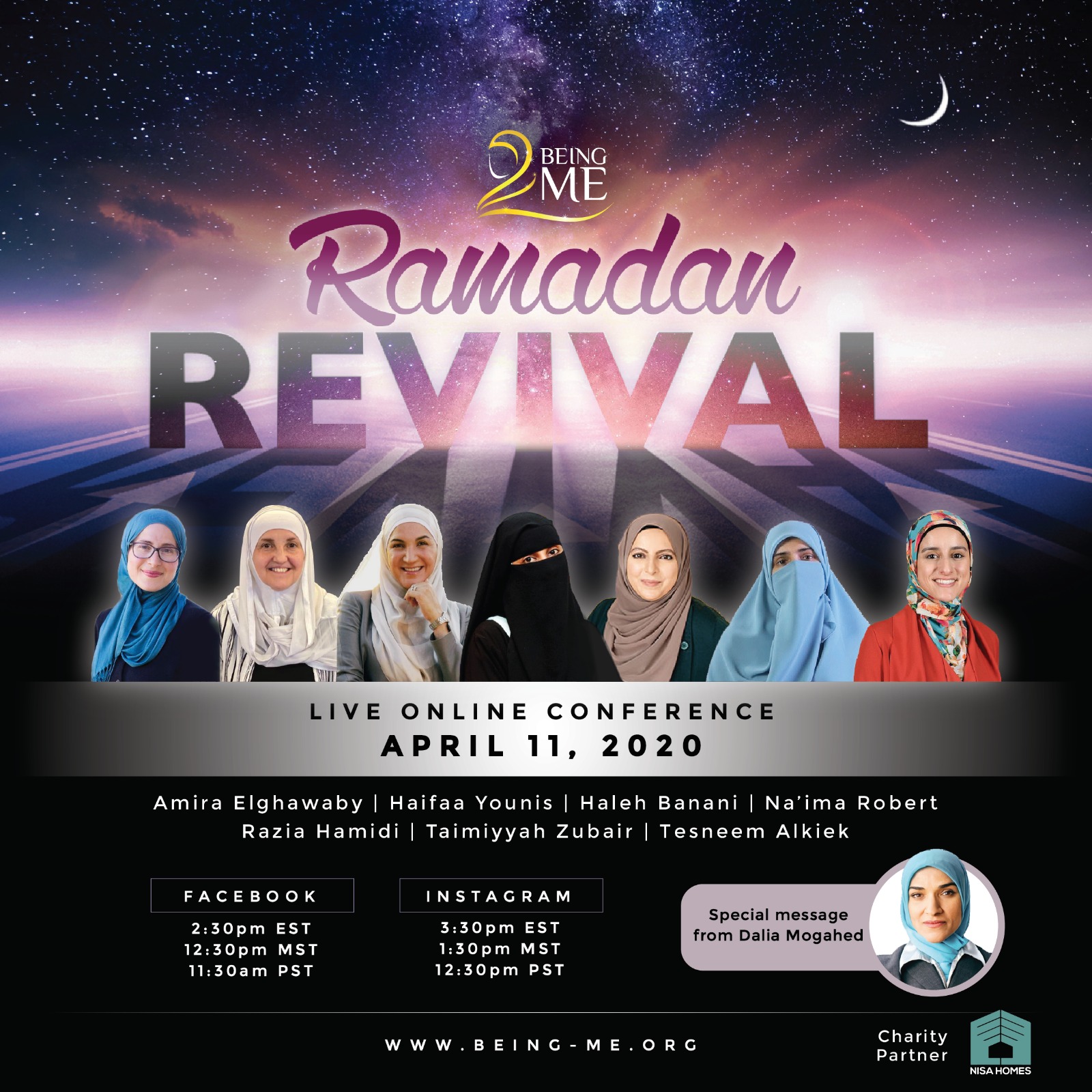 Ramadan Revival 2020! Join us April 11, 2020 for an unforgettable experience. All from the comfort of your home! How do you make the most of Ramadan? By being prepared! Join us April 11th as we get mentally and physically ready for Ramadan with a big dose of knowledge and inspiration! Let us unite together as a community to fill our cup during this blessed month. Location: Being ME Toronto - Facebook Live & IG PreRecorded https://facebook.com/events/s/ramadan-revival-2020/161039708436983/?ti=cl FB Time: 2:30pm EST 12:30pm MST 11:30pm PST Stay tuned for the final schedule release. 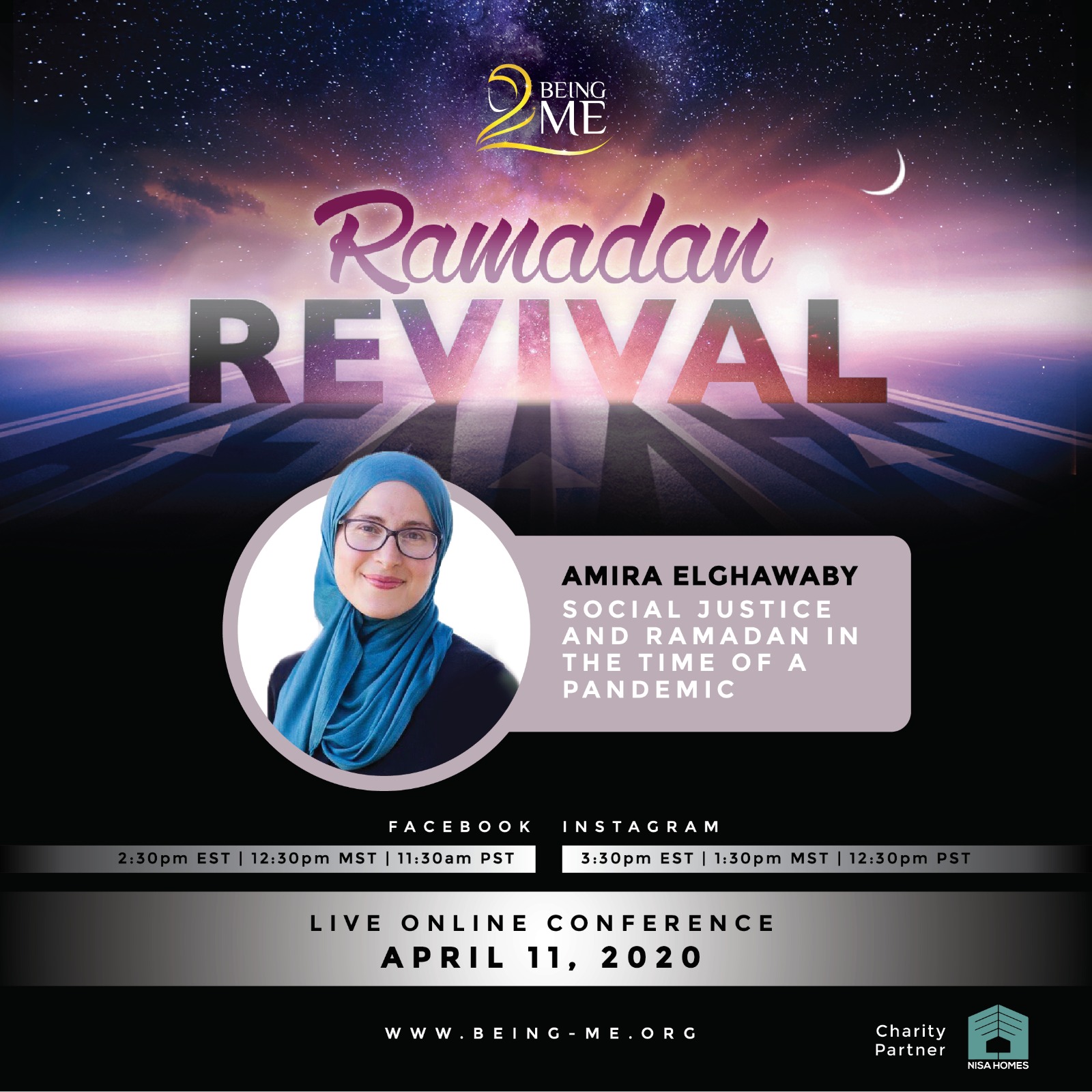 Social Justice and Ramadan in the time of a Pandemic Amira Elghawaby is a journalist and human rights advocate. Along with appearances on Canadian and international news networks, Amira has written and produced stories and commentary for CBC Radio, the Ottawa Citizen, Maclean’s, the Walrus, the Literary Review of Canada, and the Globe and Mail. She is a contributing columnist for the Toronto Star. Between 2012 and 2017, Amira promoted the civil liberties of Canadian Muslims as human rights officer and later, as director of communications, at the National Council of Canadian Muslims (NCCM). She now works in Canada’s labour movement in digital communications, helping to champion progressive issues and causes online. 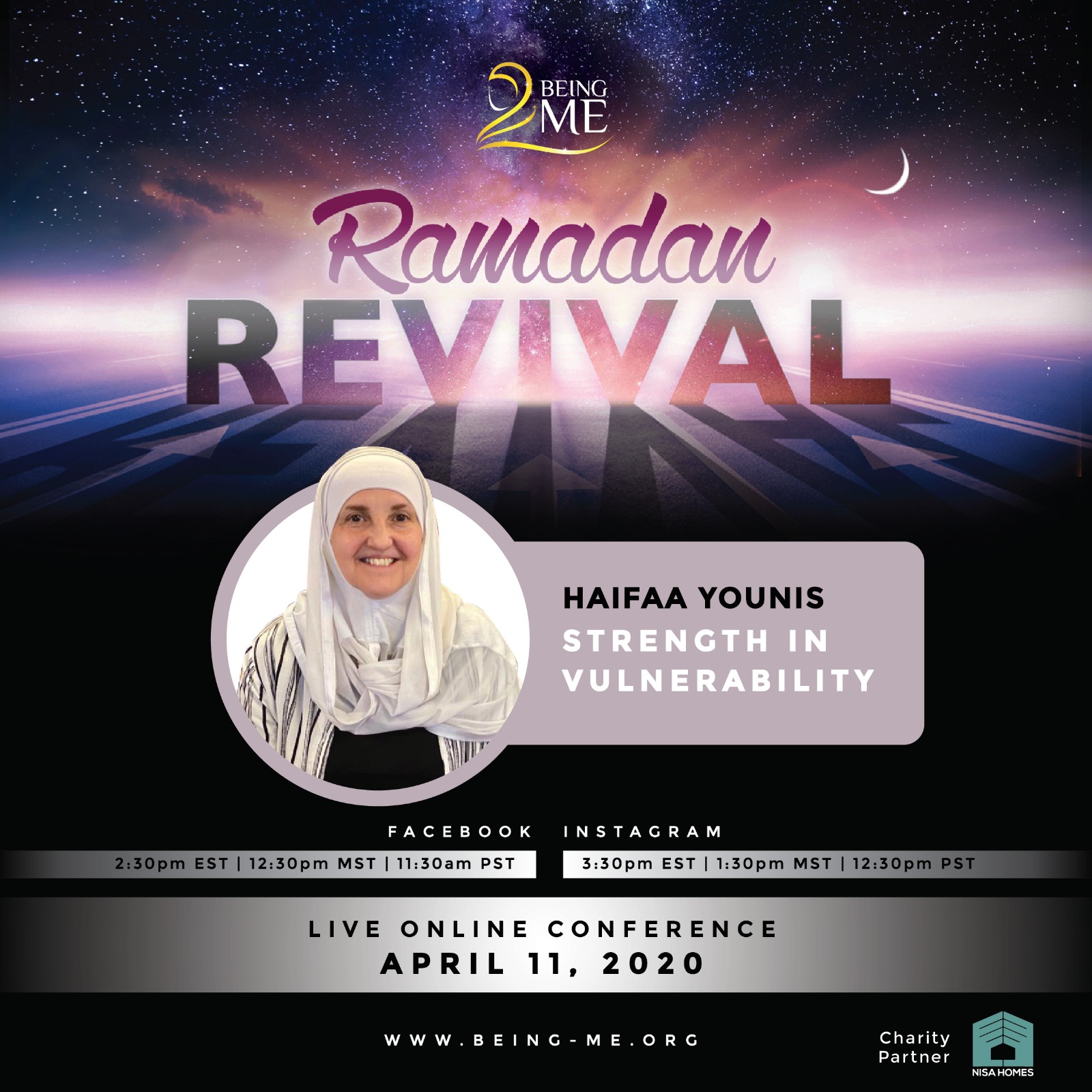 Strength in Vulnerability Dr. Haifaa Younis is an American Board Certified Obstetrician and Gynecologist with roots from Iraq. Her pursuit of Islamic knowledge started with Islamic scholars from across the United States. From the US, she moved to Saudi Arabia where she graduated from the Mecca Institute of Islamic Studies and Al-Huda Qur’an Memorization School where she completed the memorization of the Qur’an. She is the founder and Chairman of Jannah Institute and currently teaches seminars on the thematic commentary of various chapters of the Holy Qur’an and their practical relevance in our day-to-day living. Additionally, she offers retreats on key topics that inspire hearts, combining the inner essence of Islam with an outward expression of practice. 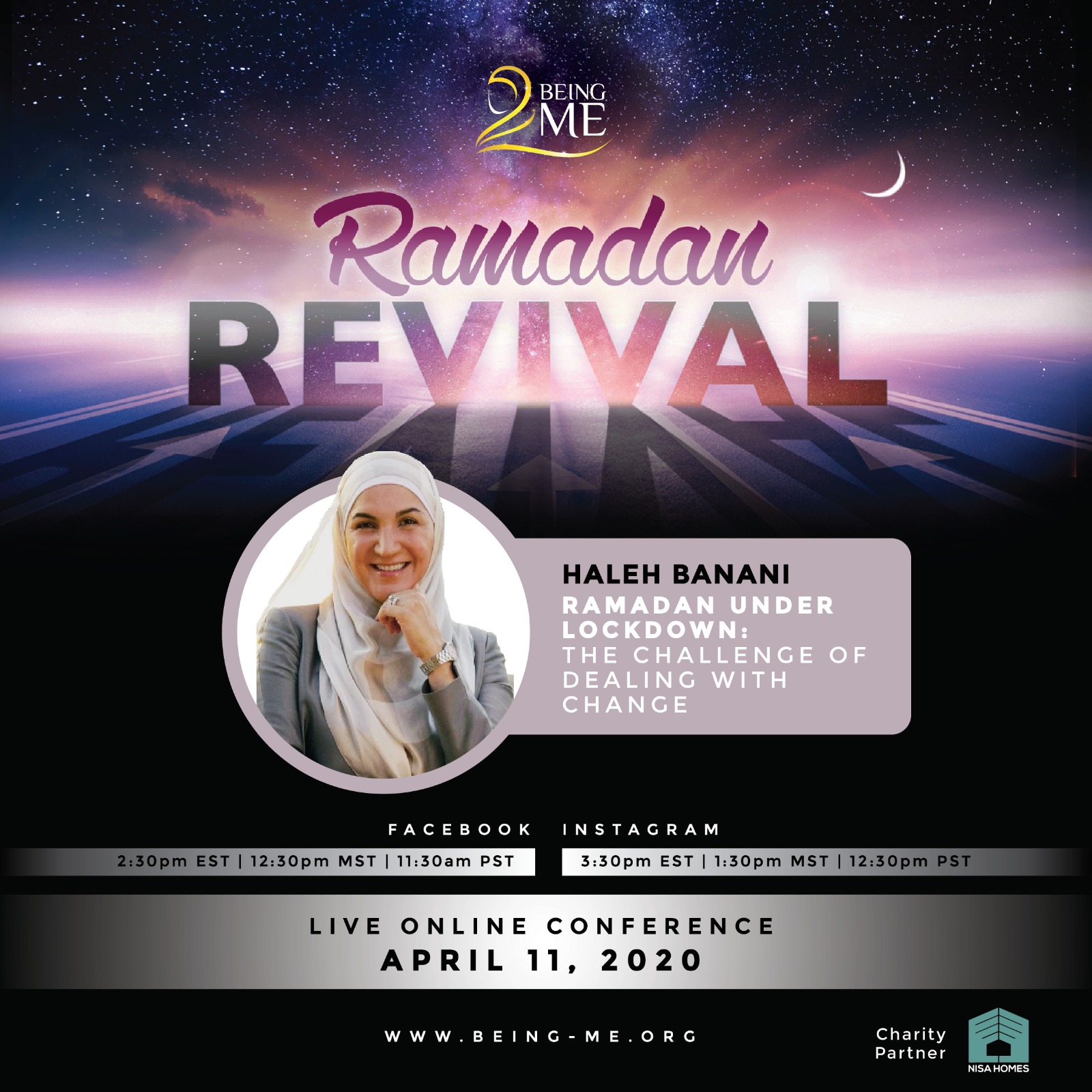 Ramadan Under Lockdown: The challenge of dealing with change Haleh Banani has a Master’s in Clinical Psychology. She is a recognized expert in the areas of marriage, parenting, self-esteem and personal achievement appearing on Al-Jazeera International, Huda TV, etc. Haleh co-founded the 5 Pillars of Marriage, with her husband, Abdelmajeed Muriby, www.5pillarsofmarriage.com. She is the mother of 3 kids; ages 16, 13 and 10 and was the host of her own TV show called ‘With Haleh’ in Egypt. Haleh has studied Islam extensively with world renowned scholars in North America and received her ijaza for the recitation of the Quran in Egypt.

A race against the Clock Naima Robert is the award-winning author of the bestseller, 'From My Sisters' Lips' and founding editor of 'SISTERS', the magazine for fabulous Muslim women. A mother of five children, she has crafted a career as an author, specialising in diverse and multicultural children's books, as well as novels for young people and a groundbreaking memoir. She has appeared on BBC's Newsnight, GMTV and on several BBC radio stations. Her work has been published in The Times Online and The Telegraph. She has been profiled in The Independent and Stylist Magazine. Through her coaching programmes, she is dedicated to helping women with a message find their voice, tell their stories and make exponential income and impact as authors and change makers. 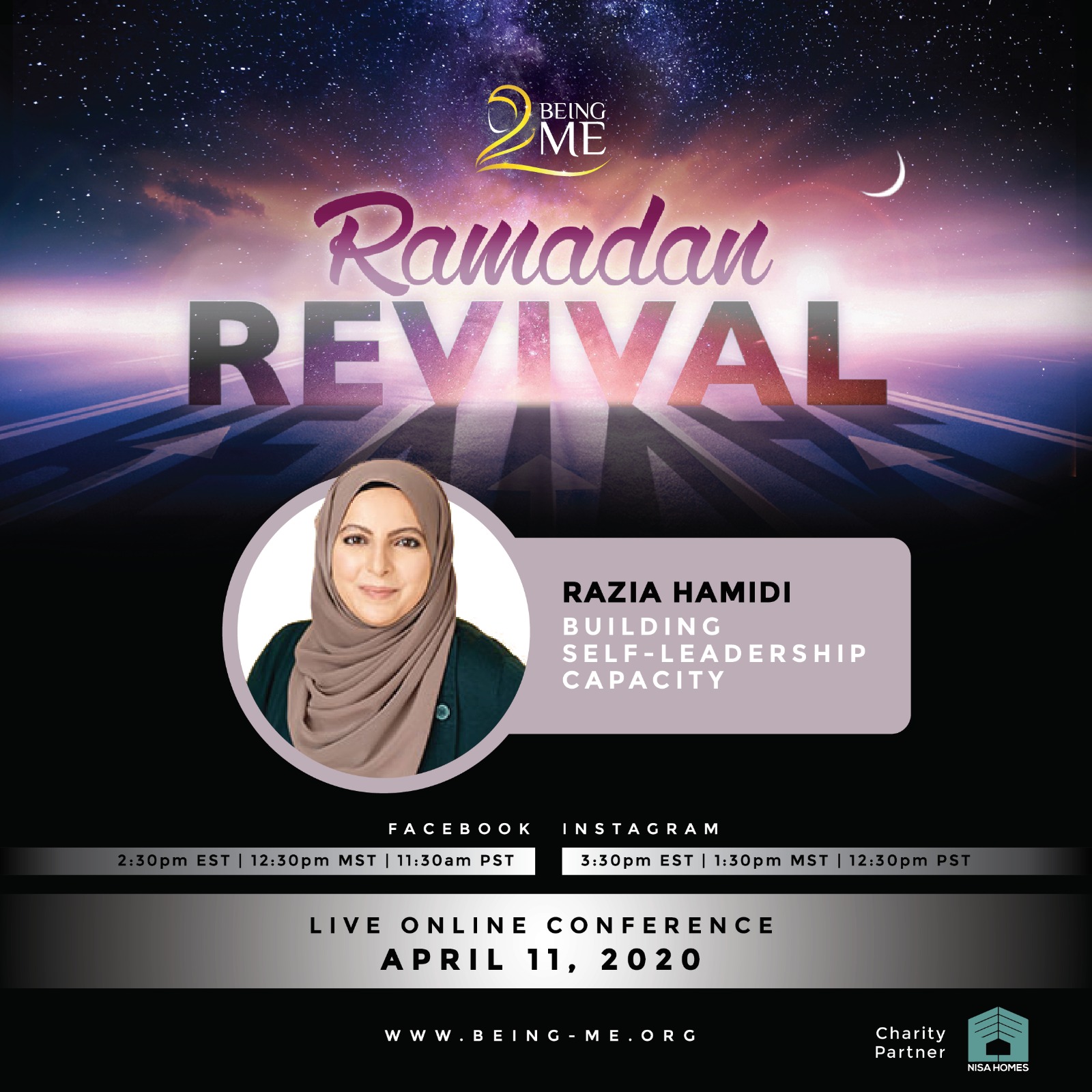 Building self-leadership capacity Razia Hamidi is passionate about inspiring grassroots change in our community. As a community activist, leader, and student of knowledge, Razia gives motivational talks across Canada. Razia has delivered various workshops, lectures, and keynote speeches at conferences and universities. She has made numerous television and radio appearances, like CBC and CTV, on topics such as human rights and Islamophobia. She is also a professional relationship coach and counselor who guides Muslim couples to build their marriage on love, harmony, and Islamic spirituality. 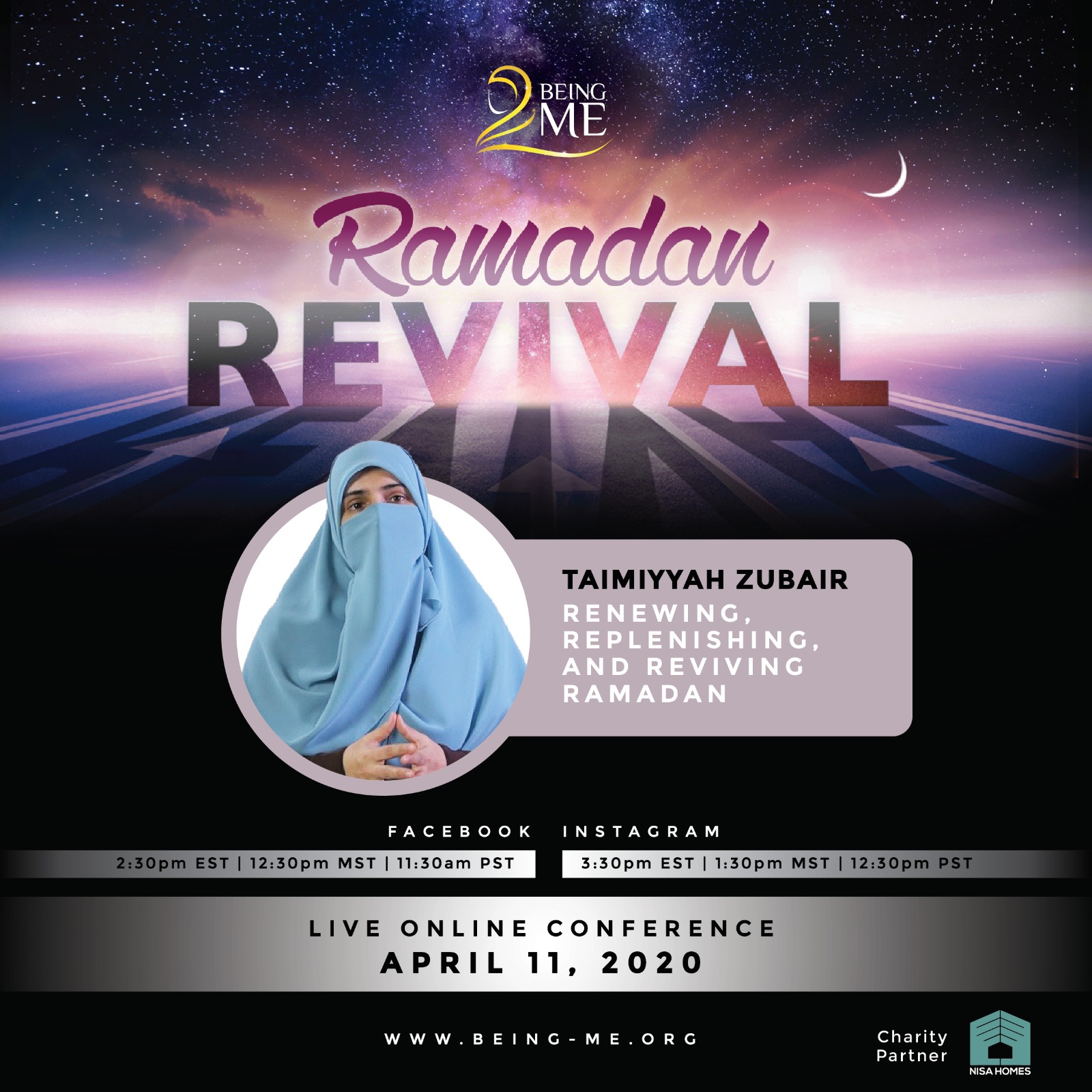 Renewing, Replenishing and Reviving Ramadan Ustadha Taimiyyah Zubair is an established teacher of Quran with a focus on Tafsir and Word Analysis. She studied under her parents and scholars, Dr. Idrees Zubair and Dr. Farhat Hashmi (founders of Al Huda International). She has been a student and teacher, at Al Huda Institute, of various Islamic Sciences including Arabic Grammar, Hadith and Fiqh. Currently, Ustadha Taimiyyah is completing her Humanities degree with a President’s Entrance Scholarship at the University of Waterloo. She also teaches around the world for AlMaghrib Institute. 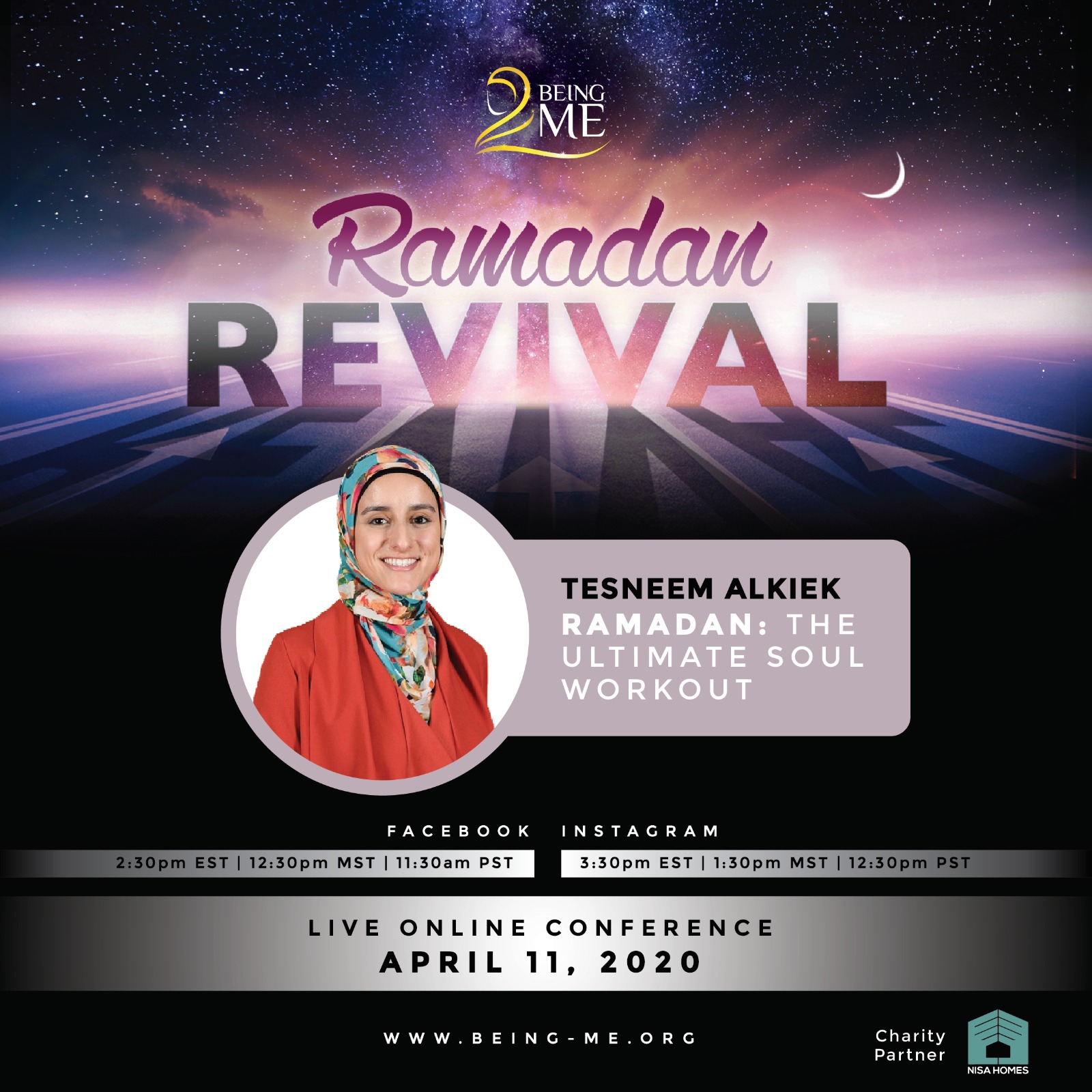 Ramadan: The ultimate soul workout Tesneem completed her undergraduate degree in Early Christianity and Islamic Studies at the University of Michigan. She is currently a Ph.D. candidate in Islamic Studies at Georgetown University with a focus on the development of Islamic law. She also serves as the Director of Expanded Learning in addition to being a Research Fellow at Yaqeen Institute for Islamic Research, where she works on both writing about topics related to doubt and conviction as well as creating curriculum and other resources for communities to engage with Yaqeen’s research.